WE ARE COVID COMPLIANT 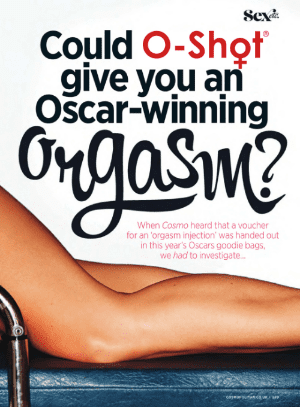 Some fun details in this article in Cosmo-(click).

The inventor, Charles Runels, MD, describes how the procedure was discovered and how it can be used to help with orgasm, cure urinary incontinence, and improve arousal and sex drive.

Of the estimated 15,000 women who have had the O-Shot, many had suffered pain or decreased sensation during sex due to childbirth or the menopause, but others were young and child-free. One is Danielle Gautier, 29 – Dr. Runels’ director of operations – who has undergone the procedure four times in training sessions for other doctors. The shots are supposed to last up to 18 months but, according to its inventor, there are no ill-effects from having them more often.

“People might think I’m exaggerating because I work for Dr Runels, but I’m delighted to be able to talk about a procedure that could help women all over the world'” says Danielle.

First time she had the shot was August 2013. She says that, contrary to what we might imagine, it isn’t painful. After numbing cream is applied, a teaspoon-sized amount of plasma is injected into the vagina, and one-fifth of a teaspoon into the clitoris. “I didn’t even feel the injection in my vagina,” she says. “There was a small stinging sensation with the one in my clitoris, but nothing bad.”

Danielle felt no difference for almost a month. “I though it hadn’t worked, but suddenly, like a light switch being flicked on, sex with the guy I was seeing completely changed. I’d had orgasms on my own, but never during intercourse. I used to tense up during sex, which made me embarrassed, so sometimes I’d fake it. After the shot, suddenly I was having orgasms multiple times and ejaculating too. It was unbelievable.”

The second time she had it, she says, “I had an orgasm walking down the hallway afterwards. After a week of feeling turned on all the time, it calmed down but my orgasms got stronger.”

First Susan applies a numbing cream to the vulva and arm. Then blood is drawn from the arm in the same way as with any blood test. Using a centrifuge with a special collection tube, platelet rich plasma is extracted. The whole process takes about 10 minutes. Then, using a very thin needle, the platelet rich plasma with growth factors are injected near the clitoris and upper vagina.   This area, called the “O-Spot” is most important for the sexual response and helping relieve urinary incontinence.  Because these areas have been numbed with the anesthetic cream, the woman feels little or no pain.

Dr. Charles Runels (Inventor of the O-Shot (R) procedure) offers survey of the medical literature in regards to the use of Platelet Rich Plasma for sexual dysfunction.

Susan VanVonderen, NP has studied with, and is certified, by Dr. Charles Runels, MD, inventor of the Vampire Face Lift, Breast Lift, P-Shot and O-Shot.

Office Hours
Get in touch